The timing of 2016's massive spike in interest rates sets us up to see a big shift in the tone of housing and mortgage-related data in 2017. There is already a wide variety of opinions on the matter--most of them fairly dire. How warranted are they?

When something in financial markets (including housing and mortgages) has been "good" for a long time, it's natural to wonder when that might change.  Even before rates spiked at the end of 2016, several major reports on home prices and sales suggested things might be leveling-off.  The rate spike only validates the concern.

In other words, if we were already wondering if prices, sales, and mortgage applications might be taking a turn for the worse, doesn't the rate spike essentially seal the deal?

Here's what we know for sure.  Rising rates have already taken a noticeable toll on mortgage applications.  While there was no new MBA application data this week, we've already seen enough evidence of the correlation.  Beyond that, refi applications are always the first thing to fall when rates move higher.

At the end of November, Freddie Mac said that mortgage activity would be "crushed" by rising rates.  Freddie's economists cited the 2013 taper tantrum as precedent for said crushing.

Freddie failed to account for the fact that refi applications were almost twice as high before the taper tantrum than they were before the election.  In other words, we don't have as far to fall before getting to the bottom of the long-term range.  Yes, applications will be just as scarce at current rates, but much of the shift may have already happened. 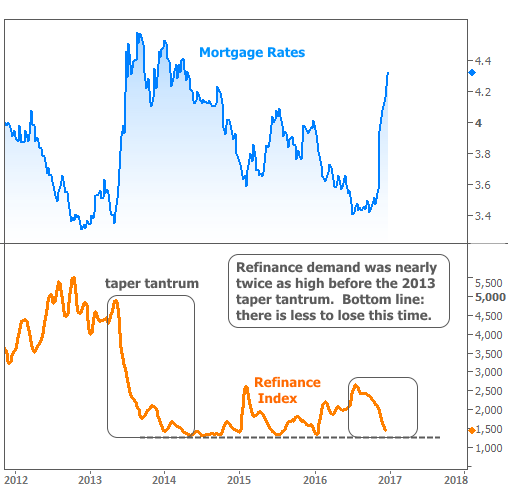 Less obvious and less immediate (and more contentious among pundits!) is the effect on home sales.  Different reports speak to different aspects of home sales.  Some are more timely than others.  For instance, last week's Existing Home Sales report covered closed transactions in November.  These wouldn't have been affected by the rate spike.

While it's true that rates have a far smaller impact on purchases compared to refis, there's definitely an effect.  This time is no different, and this week's Pending Home Sales data from the National Association of Realtors already claims the "brisk upswing in mortgage rates" has "dispirited some would-be buyers."

The Pending Sales report is much more timely than Existing Sales, because it covers contract signings as opposed to closings.  If any major report would show the effects of the rate spike, it's this one.

To be sure, further declines in sales are coming, but it remains to be seen if those declines are as sharp as they were in 2013.  We enter the current rate spike with sales already stagnating (notice the flat year-over-year change in the chart below) and a well-established home price recovery.  Contrast that to early 2013 when sales expanding quickly and prices were just showing signs of lift-off. 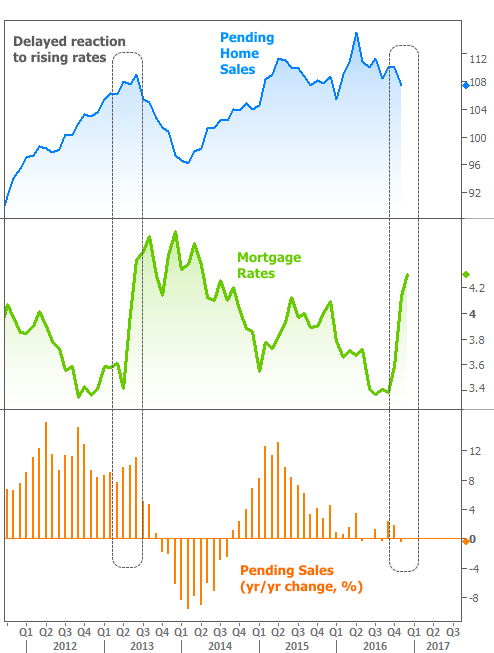 You might be noticing a theme here.  Both in terms of refi applications and home sales, things were humming along at a much nicer pace before the taper tantrum.  Coupled with fear that home prices wouldn't make a fuller recovery, we had more to lose.  A sharper correction made sense.  Because of this, 2017 is more of a wild card than a guaranteed "crushing" for mortgage activity.