Political fallout aside, the election has really shaken up financial markets.  While the evening news is more apt to focus on the stock market recovery, it's getting harder and harder to ignore the destruction of 2016's low mortgage rates.  Even the slower-to-react Freddie Mac rate survey caught up with the reality we'd already discussed last week. 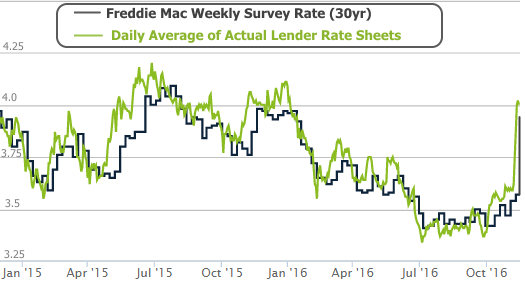 Clearly, the election was a catalyst, but why, exactly, are rates responding like this and what are the chances they can come back?

For bond markets (which dictate rates), the issue with the election isn't so much about who won, but rather, the widespread consensus that the other candidate would win.  Markets LOVE to price-in as much of the future as they can reasonably foresee.  With Clinton, that future was seen as a relative status quo.

The Trump victory started a scramble.  Investors were left to guess what Trump's actual policy path might look like and what the effects would be on financial markets.  One of the most prevalent conclusions last week was that the election made a Fed rate hike more likely, which was in turn pushing mortgage rates higher.

Although Fed rate hike expectations have moved up a bit, they certainly don't account for the move seen in longer term rates.  This is plain to see in the following chart (10yr yield is a benchmark for longer-term rates, like mortgages). 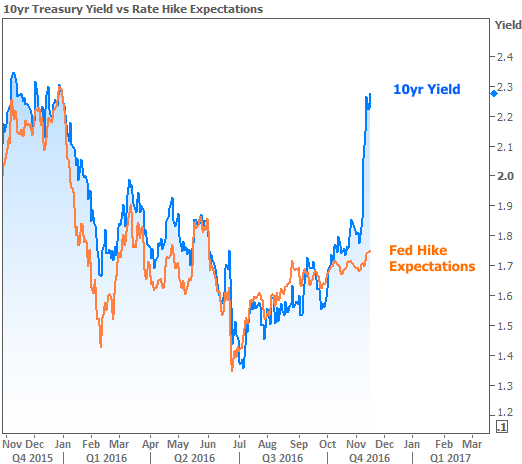 If not Fed fears, then what other insidious enemy has bond markets so scared?  There are actually several.  These include any number of the following (in order of importance and apparent level of certainty):

With the exception of the modest increase in Fed rate hike odds, the overwhelmingly unified theme here is inflation.  In general, rates will rise for a few key reasons: lower credit quality, stronger growth prospects, and higher inflation expectations.  Of those three, inflation has vastly more power to rock rates' world, especially when inflation expectations suddenly change based on fiscal or monetary policy.

If we strip out the inflation component of 10yr yields and isolate it on a chart with the non-inflation-related components, everything becomes clear. 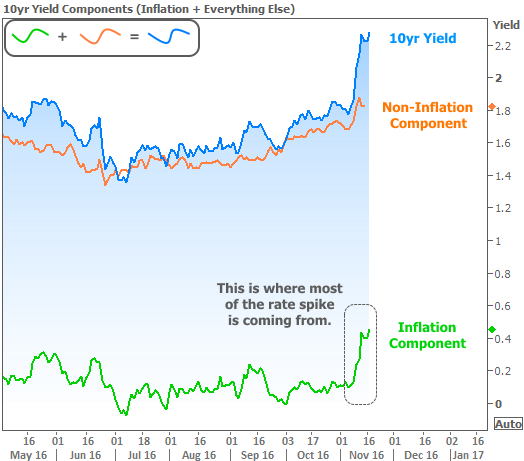 Keep in mind, of course, that this rate spike is made worse by the level of uncertainty over the ultimate policy path.  Bond markets have to account for a wider range of risks, and it's much safer for bond traders to be overly defensive of the worst-case scenario until it can be ruled out.

In the coming weeks, to whatever extent such a scenario can be ruled out (or even toned down), we could see rates ease back a bit.  But until that happens, take a cue from bond traders: expect the pain to continue until it stops.  Don't try to catch the falling knife.  The chance of timing it right isn't worth the risk of losing a digit (on your hand or on rate sheets).

While we ponder rates' fate, why not add a layer of concern by asking ourselves what a surge in rates would mean for the housing market.  It was hard not to wonder about such things after this week's impressive surge to 9yr highs in Housing Starts.  The past few reports are just now starting to break the stagnant trend from 2015 to mid-2016, and even though rates aren't the final word for residential construction, a sustained rate spike will make it hard to build on the exciting new trends. 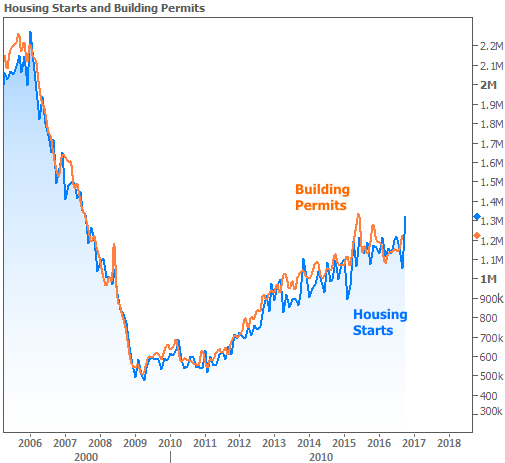