Heading into the election, interest rates tended to rise with Clinton's chances of victory. But it was a Trump victory that sent rates on their wildest ride since the 2013 Taper Tantrum. Why?!

Mortgage rates are based primarily on trading levels in mortgage-backed-securities, which are part of the broader bond market.  When investors buy bonds, they're paying for the privilege of collecting interest.  When demand for bonds increases, investors pay more for that privilege, thus allowing lenders to charge lower interest rates and still make money.

One of the quintessential investment strategies is to sell stocks and buy bonds in times of uncertainty.  This is exactly what happened when the FBI reopened the Clinton email case in the 11th hour of the election.  A potential Trump victory was associated with "uncertainty," while a Clinton victory would have been "status quo."

When some news outlets reported that an "indictment was likely" in the FBI case, stocks tumbled, and investors sought safety in the bond market, thus pushing rates lower.  When the FBI cleared Clinton, stocks and rates moved quickly back in the other direction and continued higher heading into election night.

Everything seemed logical at the time:

If Clinton were to win, uncertainty is minimized.  Buy stocks.  Sell bonds.

And that's exactly what happened!  As Trump took a decisive lead in swing states on election night, bonds staged their biggest intraday rally since Brexit and stock futures plummeted to their lowest levels since Brexit.  The logical, narrowly focused trading strategy was playing out perfectly...

Logical though it may be, the problem with reactionary trading based on single flashpoint events is that it neglects to answer the question: "what next?"

When it became apparent that Trump would win, markets turned to answering that question.  Markets knew exactly how Clinton would have governed, but Trump's likely policy path had to be extrapolated from plausible campaign promises, past precedent in the business world, and perhaps an episode or two of the Apprentice.  Point being, markets had to have some dialogue and debate about what was likely to happen under the Trump administration.

The GOP sweep of the House and Senate was a wild card that kicked the dialogue into high gear.  Light bulbs began going off in traders' minds, illuminating things like protectionist trade policies, hefty tax cuts, increased infrastructure spending, abandonment of the Fannie/Freddie conservatorship, the potential repeal of Dodd Frank, a dismantling of the Affordable Care Act, and a muzzling of the CFPB.

Much of that list points to one conclusion: increased inflation.  And that's the worst possible news for interest rates.

Consider the following: Rates are as low as they are because the Fed has struggled to create inflation via MONETARY policy.  The Fed itself has frequently pleaded for FISCAL policy to join in the fight.  And now, such fiscal policies just became infinitely more possible overnight.

It all adds up to the need for markets to very quickly reassess their longer-term inflation expectations.  Unfortunately, this reassessment manifests itself as a brutal spike in longer term rates. 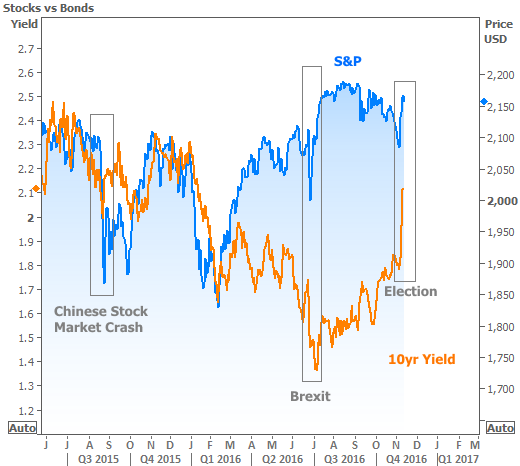 By a decisive margin, the last 2 days of this week were the worst 2 days for rates since the taper tantrum in June 2013.  The existing uptrend in rates was completely shattered, and history suggests there's still a chance of more pain ahead. 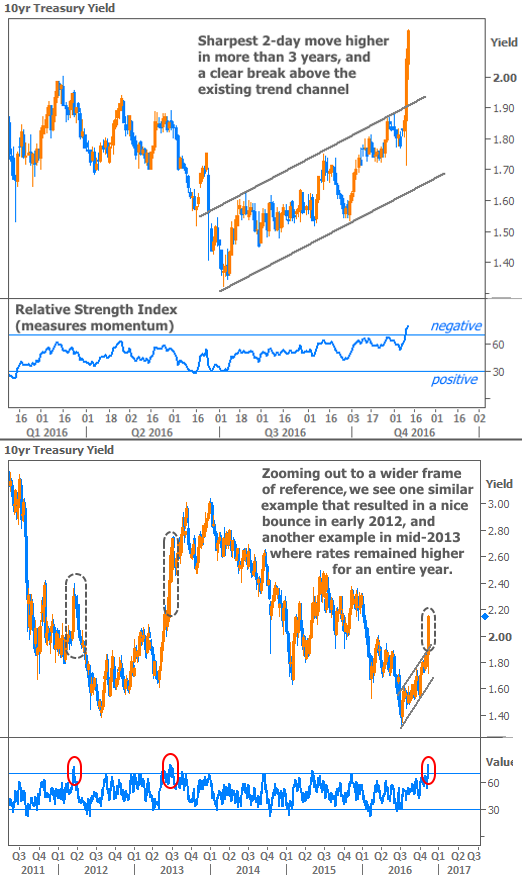 With respect to the chart above, we'd be hoping that the current rate spike ends up calming down like the early-2012 example.  However, if the European Central Bank actually does announce a plan to taper its asset purchases, a 2013-style rate spike becomes much more possible.  We'll hear from them on December 8th.

Between now and then, anyone at any stage of the mortgage process should be in close contact with their originator to discuss the game-plan for navigating the increased volatility.

Keep in mind that there can be a wide discrepancy between the actual rates on any given day and those reported by some media outlets.  Case in point, Freddie Mac's widely-cited weekly rate survey often lags the actual day-to-day changes on lender rate sheets.  It only showed a 0.03% increase this week whereas the actual damage was closer to 0.25%. 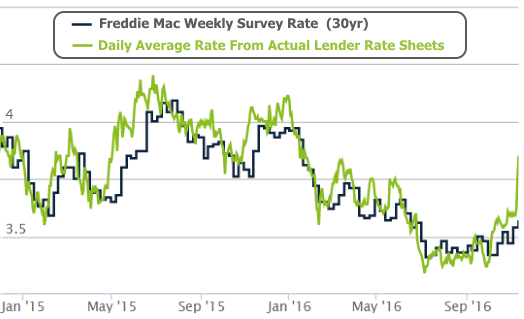