Interest rates of all shapes and sizes have been in an undeniable uptrend for more than 4 months. In discussing why this is happening and how bad could it get, we'll also look at the relative health of mortgage rates versus the broader rate market.

First, let's differentiate between a few key classes of interest rates.  In the US, the benchmark for all rate movement is the Treasury market.  That means Treasuries of various maturities (2yr, 5yr, 10yr, 30yr, etc) serve as yardsticks for all the other interest rates in the financial marketplace.  If the rate in question is shorter-term, it's compared against the shorter-term Treasuries, and so on.

Mortgage rates are a bit of a moving target because homeowners typically only keep a mortgage for 5-10 years, even if they take out a 30yr loan.  As far as investors are concerned, that means mortgages get compared to 5-10yr Treasuries.  Of these two, 10yr Treasuries are the favored benchmark by quite a wide margin.  Another way to think of this would be to say "mortgage rates should generally move like 10yr Treasury yields."

Away from the world of 10yr Treasury yields and mortgage rates, there are super short-term rates like Treasury bills and even overnight rates (which banks charge each other for short term funding needs).  In fact, the Fed Funds Rate--the thing we're talking about any time we discuss a potential Fed rate hike--is just such a rate.

Fed policy has the most direct effect on short-term rates.  The Fed sets a target for overnight rates and implements policies to make sure rates stay near the target.  This effectively anchors the entire spectrum of the interest rate world.  The shorter the term of any given rate, the more it will correlate with Fed Funds Rate expectations.

On the top section of the following chart notice how 2yr Treasury yields (a fairly short-term rate) are closely correlated with Fed rate hike expectations (green and orange lines look fairly similar).  10yr Treasuries, on the other hand, take their cues from more diverse sources (blue line isn't totally following the other 2). 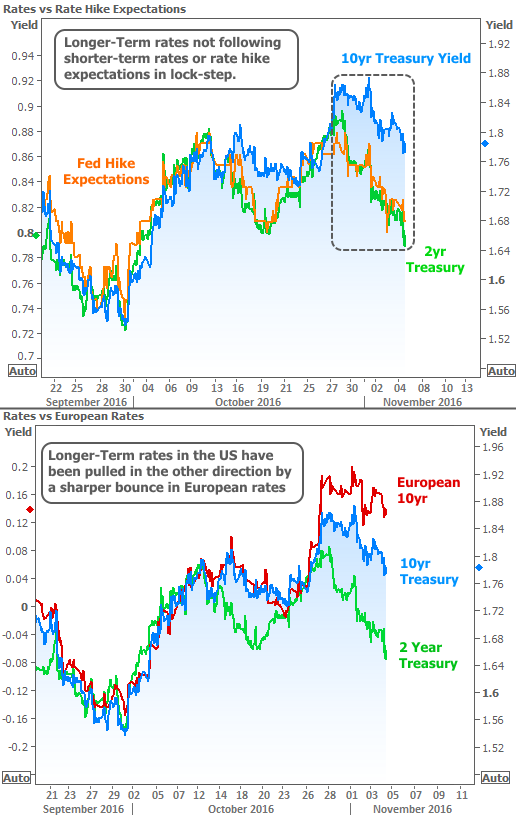 As the chart shows, 10yr yields (a preferred proxy for mortgage rates) are taking some of their marching orders from European bond markets.  This is due to the interconnectedness of global bond markets in conjunction with the risk that Europe is close to curtailing its bond-buying program.  Less buying = lower prices = higher rates.

That's the fear anyway, but we won't get an official update from The European Central Bank (the folks in charge of the bond-buying program) until early December.

If all of that is confusing, just think about the Fed's QE program.  The Fed bought US Treasuries and Mortgage-Backed-Securities.  The massive amount of additional, guaranteed buying demand in the marketplace pushed prices of those bonds higher.  And higher bond prices result in lower rates.  The Fed already tapered its asset purchases.  Markets freaked out (taper tantrum).  And now markets are freaking out about the possibility that Europe will taper its purchases just as the Fed did.

Everything's relative though.  As you might expect, European rates would be the most affected by European tapering.  Fortunately for those of us in the housing/mortgage market, mortgage rates in the US are yet another degree of separation away from the potential European taper tantrum.  Just as the previous chart showed US Treasuries resisting the volatility of European bonds, the following chart shows mortgage rates resisting the volatility in US Treasuries (orange line keeping a narrower range relative to the blue line). 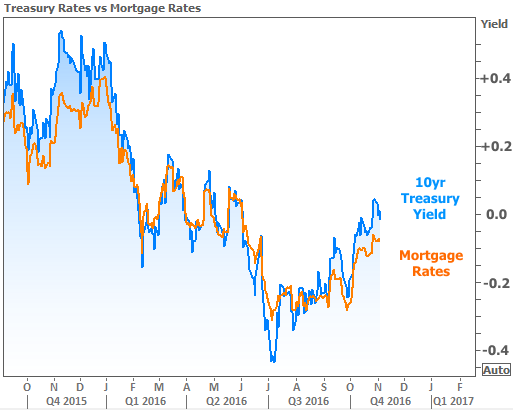 Bottom line: for any given amount of interest rate drama in the news, mortgage rates have been fairly well insulated.  That will continue to be the case unless the moves get much bigger, and again, we're probably waiting until early December to find out if that will be the case.

In the meantime, things like the election and economic data can certainly add to smaller-scale volatility.  In general, financial markets have been treating a Trump victory as the better-case scenario for rates.  The logic is that a Trump presidency would create more uncertainty, and investors protect against uncertainty by buying bonds.  The tacit implication is that a Clinton victory could push rates even higher.

What does "higher" even mean right now though?  It's extremely relative, to be sure, considering mortgage rates are technically at 5-month highs at the moment, with the average lender quoting their best 30yr fixed rates in the middle of the 3% range.

There were several economic reports out this week with Friday's fairly strong jobs report being the headliner.  Payroll growth (NFP) was lower than expected, but revisions to last month's NFP more than made up for it.  In addition, U-6 underemployment fell 0.2 percent and wage growth was better than expected.

That news would typically hurt bonds and push rates higher at this stage in the economic cycle.  But due to the aforementioned European influences, rates actually moved slightly lower to end the week.