there was "Grexit"--financial markets' pet term for Greece potentially exiting the European Union. It was a serious situation because Greece shared the Euro currency with 18 other countries and was at risk of defaulting on sovereign debt.

The fear was a systemic collapse of the Eurozone (think "dominoes"), and investors bought bonds in the strongest countries in order to keep their money safe.  That resulted in lots of volatility and a massive drop in global interest rates (when investors buy bonds, rates fall) before finally fading from prominence with the Greek bailout deal.

When Brexit headlines emerged (a potential British exit the EU), no one thought much of it.  The U.K. does NOT share the Euro currency with the rest of the Union and wasn't facing potential default. What's the big deal?

It turns out there are several big deals--at least for now.  The U.K. may not use the same currency as the Eurozone countries, but it is part of the European Union--a system designed to facilitate the free flow of trade, people, money, and legislation in Europe.  No one really knows what to expect if The U.K. leaves, but at the very least, investors assume it would detract from growth in several ways at a time where the EU needs all the growth it can get.

Still, it's not the growth implications that are most important to investors at the moment.  Rather, it's the systemic implications.  In other words, if The UK leaves, who will leave next?  And if the entire EU is at risk of disintegrating--even if only partially--how are investors supposed to prepare for that?  Even the Fed says a June rate hike is unlikely because it wants to see what happens in the wake of the Brexit vote at the end of the month.

If the Fed cares that much, it's automatically a big deal for the rest of the world.  So what should investors do about it?   Faced with a potential 'first,' fear of the unknown has prompted investors to buy bonds and sell stocks.  Of course, this is primarily a consideration for European markets and indeed, that's where we see the biggest movement, but the direct effects reverberate through global financial markets.

One of the frontline beneficiaries happens to be US bond markets, as you can see in the chart below. 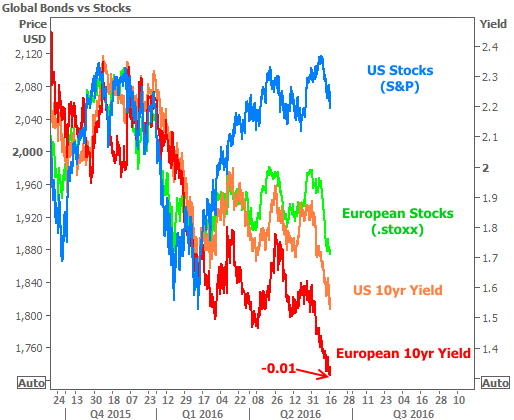 If US Treasuries are one degree removed from the Brexit-related market momentum, Mortgage Rates are yet another degree removed.  It's not that they haven't been moving lower, just that they cannot possibly keep pace with Treasuries.  Not only is this a normal turn of events, but it's actually a stronger performance than we saw in 2012--the last time global financial markets were panicking over systemic European risk. 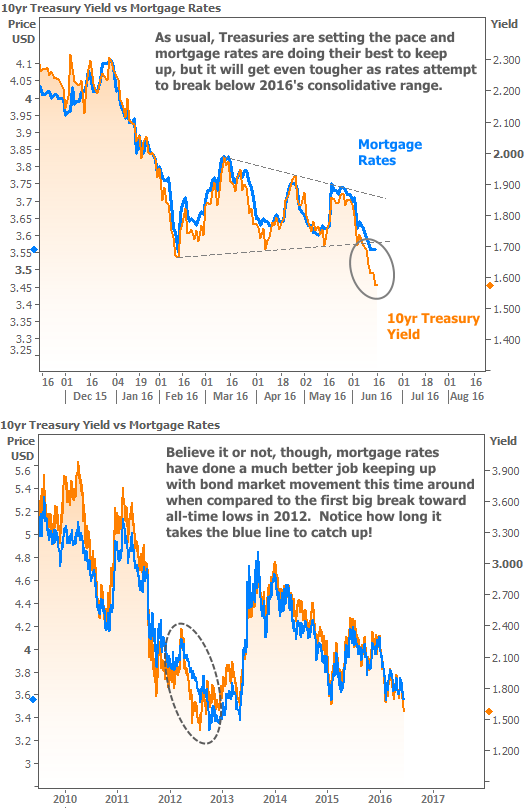 And so it came to be that this week's Fed Announcement--something that was previously destined to be a major market mover--was relegated to being a speedbump for market movement that was already in progress.  If anything, the Fed merely confirmed they were spooked by Brexit risks, as well as the most recent jobs data.

This sets up a very big showdown over the next few weeks.  If The U.K. happens to vote to remain in the EU and the next jobs report happens to be exceptionally strong, investors will QUICKLY start talking about a summertime rate hike from the Fed.  With rates as low as they are right now, that would make for an abrupt correction higher.