2018 has been an interesting year to say the least. Stocks hit all-time highs and are now in the midst of their worst month on record in terms of outright losses. Rates hit their highest levels in at least 7 years but have fallen fairly quickly heading into the end of the year.

The 11th-hour volatility raises a few big questions about what's on the horizon.  Could rates continue to drop or was this just a temporary diversion?  Will stocks regain much of the recently lost territory, or are we merely at the beginning of an even bigger crash?

There are plenty of opinions on both sides of these questions.  Only time will tell, but if we assume a bigger stock crash requires decelerating economic growth, we're certainly getting closer with each passing day.  Economic cycles may not die of old age, but the longer they live, the more time there is for them to discover new reasons for their mortality.

At the very least, we know investors are worrying about it. But we also know we haven't lost enough ground yet to call this "the big one" definitively. In fact, in percentage terms, current stock losses aren't much worse than those seen in 2016. 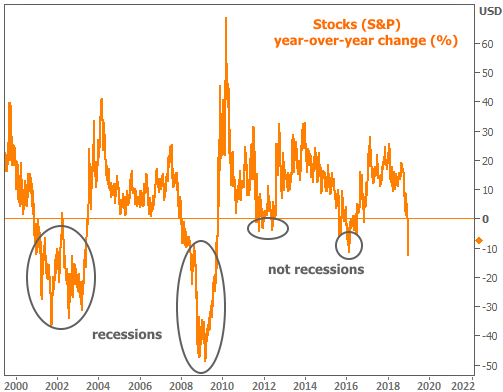 All that to say there's still a very real possibility that stocks stage a miraculous recovery in January.  From there, the question would shift to rates, considering much of the recent drop in rates can be traced to stock market volatility.

Fortunately, rates haven't been nearly as volatile as stocks in relative terms.  This means they've dropped more slowly and been less eager to jump higher when stocks attempt to lead the way.  Here's an example of how that played out this week: 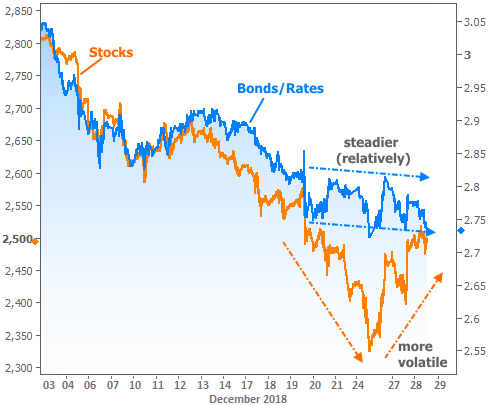 The upcoming week will be an interesting mix of holiday-related distortions and potentially significant economic data.  Like the outgoing week, Monday will be a half day for the bond market and Tuesday will be a full closure (New Years Day instead of Christmas this time around).  Then, 2019 begins in earnest as market participation ramps up heading into the big jobs report on Friday.

The jobs report (officially, the "Employment Situation," which provides the nation's official jobs tally as well as the unemployment rate) is more important than normal for a few reasons.  We know the Fed is considering a slower pace of rate hikes and that it will be using key economic reports in its decision-making process.  No other report is more 'key' than this one.

Additionally, while the government shutdown will prevent other reports from being released on time, as far as we know now, the jobs report will not be affected, thus magnifying its relative importance to the week's slate of actionable info.  Even without the shutdown considerations, the jobs report would already be more important than normal simply due to timing.  After all, markets are considering big questions for the new year and this will be the new year's first piece of data that's qualified to comment on those questions.