One short week after witnessing a return of interest rate volatility, it disappeared again this week. Mortgage rates saw some small-scale ups and downs, but generally held very close to last Friday's levels.  All this despite the presence of important economic data and a policy announcement from the Fed.

Investors are wrestling with bigger decisions about where the economy goes from here.  This might seem a bit silly considering economic data has been stable and strong for so long, but  financial markets are always doing their best to price-in the future.

When the tax bill was just coming to fruition in early 2018, the future seemed much clearer.  Treasury yields would still have to rise because they hadn't yet priced-in the excess government debt supply associated with the tax bill (more supply = higher rates).

On the other side of the market, equities traders were just beginning to price-in the tax bill's anticipated effect on corporate earnings.  And of course, the Fed would have to hike rates a bit more quickly if the tax bill ended up having a stimulative effect.

As of mid-February, markets were telling us this "pricing-in" process was potentially winding down.  Bonds had reached a bit of a plateau and were finally moving sideways.  Stocks had recovered from the early February flash crash and began to consolidate without making new highs.  We even saw a plateau in the markets that bet on the Fed's rate hike pace.

Then the trade war headlines began to circulate.  This was to be the theme that would underpin a growing level of indecision in the marketplace.  It was the manifestation of the question: have investors priced-in enough of the future's positive economic potential?

While it may well be far too early for the debate, the question of the timing of the next recession (or simply the next economic deceleration) is already being asked.  One of the most common arguments in favor of asking the question is the falling (or flattening) "yield curve"--the spread between 2yr and 10yr Treasury yields.

Although many pundits and even several Fed members have opined that history will not repeat itself in the same way this time around, in the past, an inverted yield curve (2yr > 10yr) has preceded 3 out of the last 3 recessions. 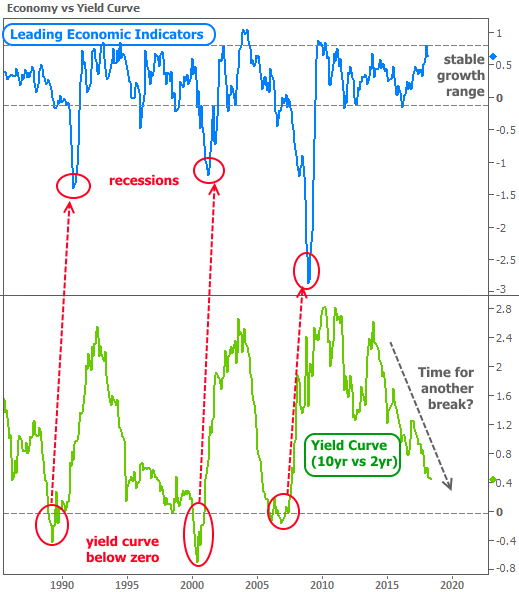 As you might guess, a recession has negative implications for stocks, but it typically coincides with lower interest rates.  The timing isn't coincidental.  Stocks have been consolidating in a an ever-narrower range.  This means they MUST break out soon. 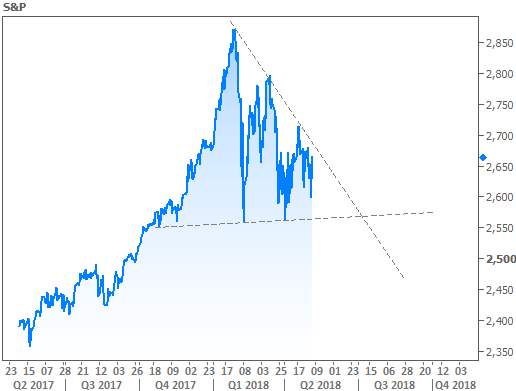 Bonds are also at a crossroads, having just lived through their 2nd encounter with the most important rate ceiling in more than 10 years.  We've already discussed reasons that 3% shouldn't be as firm of a ceiling when comparing the present situation to that seen in 2013/2014, but some investors are still holding out hope.  Granted, it COULD happen if the bigger picture gets cloudy enough, quickly enough, but the 2 pessimistic scenarios in the following chart of 10yr yields are also on the table. 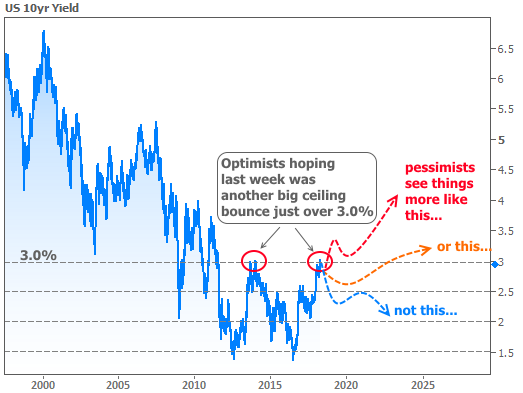 As for nearer-term, smaller scale considerations, the unsung hero of the past few weeks (and potentially even the past few months) has been a downturn in European economic data and European bond yields.  The German 10yr yield is the representative benchmark rate for Europe, and it's arguably been leading the way for US 10yr yields at times.

This week, a sharp drop in European rates helped US rates just as much as the important domestic data that came out on Wednesday (a Treasury auction announcement that allayed concerns about how new bond supply could hit the market, and the Fed's relatively tame policy announcement).  Things will get more interesting if German yields manage to break the floor seen in the lower pane of the chart (and interesting in a bad way if they break the highs seen during the last "bounce"): 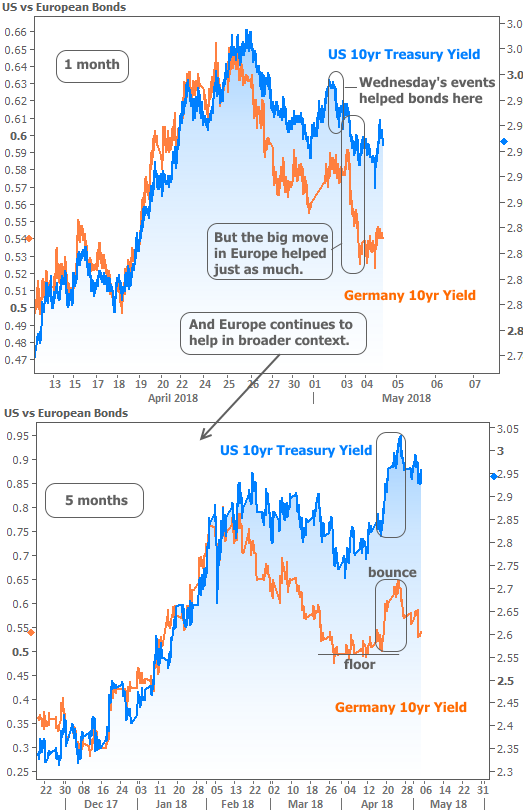 The modest volatility at the end of the week came courtesy of the big jobs report.  The job tally missed the mark, but was essentially 'as-expected' after we count last month's revisions.  Wage growth slowed, but not in a terrifying way.  At first glance, the slightly weaker data was good for bonds, but because last month's data was so rotten, this month's only had to come close in order to keep bonds from getting too excited.  With that, rates finished out the week roughly unchanged.

In housing-related news, Pending Home Sales improved, but by slightly less than forecast.  The series continues grinding sideways near its post-crisis plateau--something that's unlikely to change without a big shift in the inventory situation. 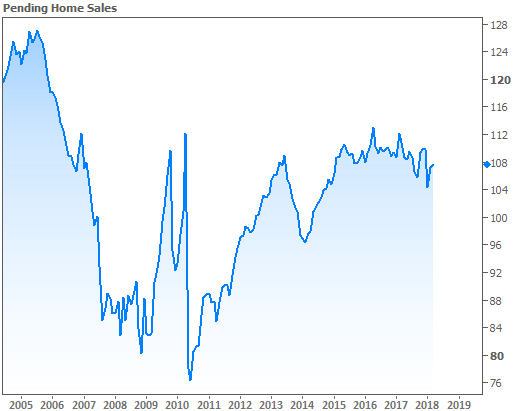