Rates ended the week at the best levels since late May. That sounds pretty great, right?! Unfortunately, there's a fairly big catch.

The problem with the past month and a half is that the range has been excruciatingly narrow.  In fact, if you've been in the market for a loan during that time, you probably haven't seen your quoted interest rate change at all.

The chart below only looks like it's moving in July because it is adjusted for small day-to-day changes in lenders' upfront costs.  That's a bit of tricky topic because "upfront costs" mean different things to different people.  In this case, it refers to the costs that correspond with any given rate on a lender rate sheet.

These upfront costs let us see mortgage rate movement even if the payment rate or "note rate" isn't moving. Think of them as fine-tuning adjustments. 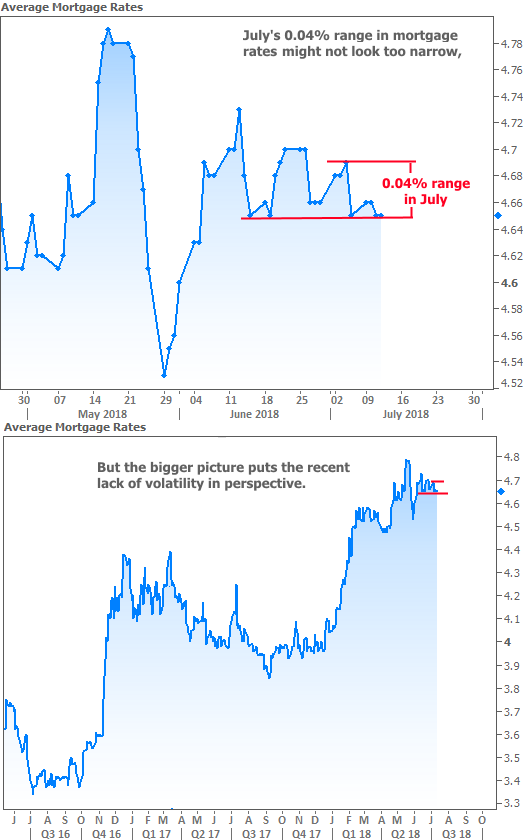 Why does any of that matter?  In one sense, it prepares you to be appropriately cynical about next week's potential mortgage rate headlines.  Beyond that, the sideways grind in rates is one of our industry's most visible manifestations of the uncertainty in broader financial markets.

Part of the uncertainty is due to the general realities of summertime trading--especially in the bond market (which underlies rates).  A bigger driver of uncertainty is something we talked about in last week's newsletter: the implementation of tariffs on China and the fear of market backlash.

There's a visible reference to the uncertainty in the correlation between stocks and bonds heading into the end of last week.  We often see both sides of the market huddle together with higher lows and lower highs, waiting for an indication of the next big move.  The chart below shows that stocks quickly forgot about last week's fears while the jury is still out for bonds. 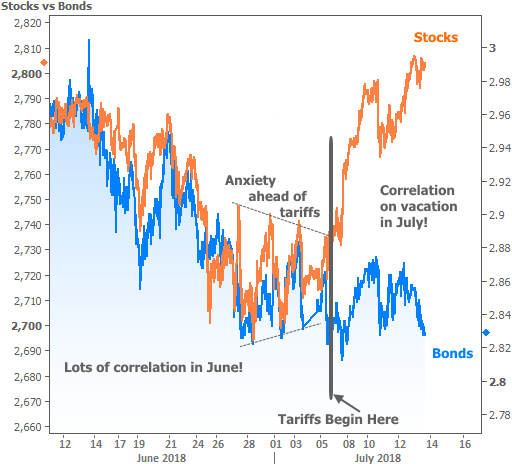 So who's telling the truth here?  Did stocks jump the gun or are bonds taking too much time to decide?  As is often the case, zooming out a bit will tell us what we need to know.  Incidentally, BOTH stocks and bonds are still in bigger-picture consolidation patterns for essentially all of 2018. 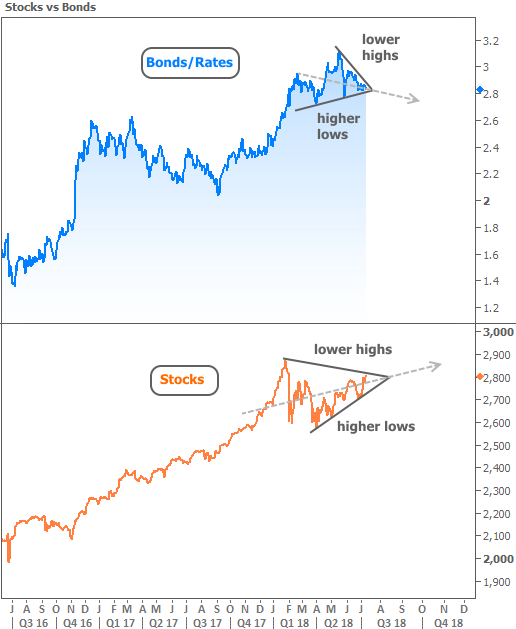 In other words, neither side of the market is telling the truth OR lying.  Both still aren't exactly sure which way the next move will go.  If past precedent is any guide, we may be waiting to find out conclusively until the summertime trading slowdown ends in September.  Either way, the presence of these consolidations greatly increases the odds of a bigger move on the horizon.