As we learned roughly 10 years ago, relentless home price appreciation can be "too much of a good thing."  While the mortgage meltdown was multifaceted to say the least, the sense of perpetually higher home values didn't help slow things down.  Fortunately, current underwriting guidelines and compliance considerations simply won't allow for a repeat performance.  Prices have been rising for more logical reasons this time around.

Two weeks ago, a Fannie Mae survey showed a record number of homeowners thought it was a good time to sell. Last week, the National Association of Realtors warned of a "housing emergency" on the horizon if supply/demand imbalances continue. All the while, rents have remained high, rates have remained low, and guidelines have made it somewhat easier for prospective buyers to qualify for a mortgage.  Higher home prices are a logical result.

Until this week, the pace of home price appreciation was easily characterized as "stronger than expected."  Unlike the 15-17% year-over-year gains seen in 2004-2006, the past 3 years have seen a stable range of 5-7%.  Economists figured that range would be moving down into the 4's in 2017.  As such, the most recent CoreLogic tally of 6.9% certainly classifies as "stronger than expected" without coming close to the exuberance of the pre-meltdown era.

Then a report like this week's New Home Sales comes along.  It shows a 16.8% year-over-year advance in home prices, not to mention a record high level of $345,800.  Is it time to freak out about too much of a good thing? 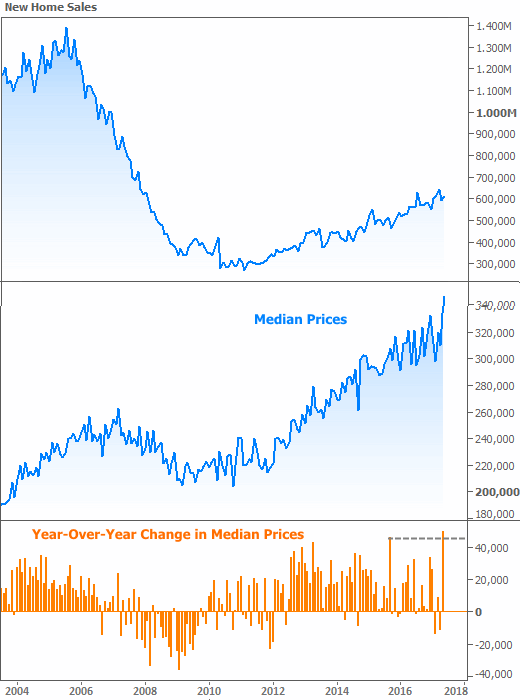 As the chart suggests, these sorts of spikes happen from time to time.  Big, isolated spikes have also been more frequent in recent years compared to 2004-2006 or 2013-2014.  This is largely due to geographical patterns.

Specifically, prices in the Southern region have been growing faster than the Midwestern region.  A 24% year-over-year decrease in Midwestern sales versus an increase of 15% in the South, goes a long way toward driving the general advance in median prices.

The Western region explains the rest--especially the isolated spikes.  Sales are up more than 14% year-over-year in the West, and prices have been rising rapidly.  The West's median home price ($370,100 in Q1) is also well above the national median, and has been over $340k since Q2 2014.

Given that the Western sales rose 13.3% month-over-month versus the next closest region (South) at 6.2%, and that the Midwest fell by 25.7% month-over-month, it's no surprise to see the national median dragged quickly higher in the current Census Bureau data.

Does this really mean that home prices are up 16.8% year-over-year?  The Census Bureau will be the first to tell you about the margin of error in this data (±21.9 percent year-over-year). Revisions notwithstanding, there's also a good chance this month's numbers will simply be an outlier.

On a final note, it's always good to remember just how small a proportion of home sales are accounted for by new construction.  May's tally of 610k (annual pace) pales in comparison to the Existing Home Sales numbers of 5.62 million reported this week.  Additionally, NAR's non-seasonally-adjusted prices paint a much more linear picture, as seen in the following chart. 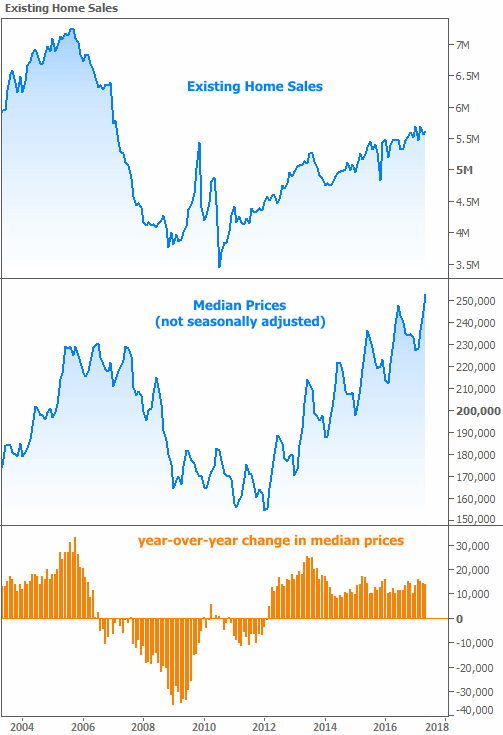 Bottom line: prices are certainly rising, but take the Census Bureau headlines with a grain of salt.

While there's typically a fair amount to discuss each week regarding interest rate movement, the current week was exceptionally quiet.  There weren't many market movers on tap in the first place.  Beyond that, we're entering a traditionally quieter time of year for financial markets where rates are less inclined to move unless given a good reason (like the taper tantrum in 2013 or Brexit in 2016).

Following last week's volatility (due to economic data and the Fed on Wednesday), every subsequent trading day has seen rates hold inside a much narrower range.  While it's not great for excitement, it's a great time to be flat considering rates are near their best levels in more than 8 months.

The bigger picture is starting to look more and more promising as well.  Whereas the consensus among economists was for sea change in rates following the US presidential election, we've instead seen a spike that looks more similar to the 2013 taper tantrum than the truly threatening trend seen from 2003-2008. 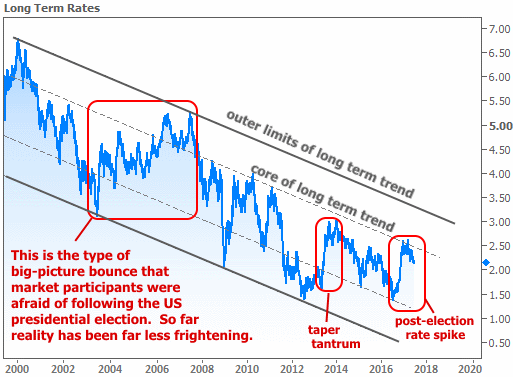 Next week should see some volatility return to rates markets thanks to several higher tier economic reports as well as the month/quarter-end trading environment (which creates a significant amount of compulsory trading needs for money managers).