Even before it began, this week was destined to be interesting, if not downright important, due to the data and events on the calendar.  The scheduled events were joined by unexpected headlines, making for even more market volatility.  By Friday, just when the stars seemed to align for rates to break below 2017's constrictive range, they shot paradoxically higher! Why would they do such a thing?

The first thing that made this week interesting was that Monday marked the start of a new month of trading.  From a trader's perspective, the first day of a new month often requires an adjustment in trading positions.  Certain traders are required to hold certain positions at the end of any given month and they can be eager to adjust those positions at the opening bell of the following month.  That's exactly what happened on Monday, and in this case, it resulted in rates moving nicely lower.

From there, the next major item on the agenda was Wednesday's release of the minutes from the most recent Fed meeting.  Investors were eager to see the Fed's more detailed discussion on "reinvestments."  This refers to the Fed's existing policy of reinvesting the money it earns on its bond holdings back into the same type of bond.

The reinvestments add up to a lot of support for low rates, and this was the first meeting where the Fed formally discussed a plan to curtail them.  Bond traders were fairly well-prepared for this.  In fact, the Fed's actual stance on reinvestments fell short of traders' fears.  This accounted for part of the move lower in rates on Wednesday afternoon.

The other part of the move came courtesy of a sharp drop in stock prices.  Stocks were spooked by several Fed members expressing some concern about valuations in equities markets.  In general, this would lead investors to believe the Fed won't be shy about removing monetary accommodation.  Less accommodation makes it harder for stocks to continue soaring.  As money fled the stock market, some of it found its way into bond markets (more bond buying demand = lower rates).

With the Fed out of the way, markets turned their attention to Friday's big jobs report.  But before Thursday officially ended, news broke regarding the US air strikes in Syria.  Unexpected armed conflict involving the US tends to cause a "flight to safety" in financial markets (stocks and interest rates moving lower together), especially if it occurs after domestic market hours.

When it comes to such flights to safety, markets tend to move first and ask questions later.  Slightly more often than not, this results in the most extreme trading levels being seen in the immediate wake of the news while the following trading day sees a bounce back in the other direction.  To say that's exactly what happened on Friday would be an understatement. 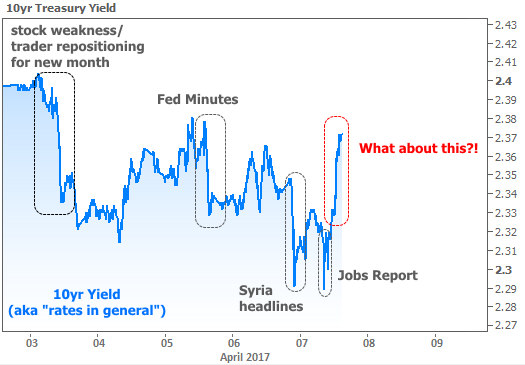 Rates and stock prices were already on their way back up when the jobs report came out MUCH weaker than expected.  This was a bit of a curveball considering most bond buyers had already seen plenty of motivation.  But the jobs report was so weak that traders were compelled to push rates even lower.

Bottom line, the weak jobs data made sure anyone willing to buy any more bonds had done so by 8:40am (10 minutes after the report came out).  Buyers were then completely tapped-out.  Many of them became sellers or were simply done buying for the day (when sellers outnumber buyers in bond markets, rates move higher).

While all this volatility was interesting, unexpected, and exciting to watch, it wasn't necessarily extreme in the bigger picture.  The following chart shows how it stacks up.  The moral of the story is that rates continue struggling to break below the post-election range, despite keeping us on the edge of our seats over the past few days. 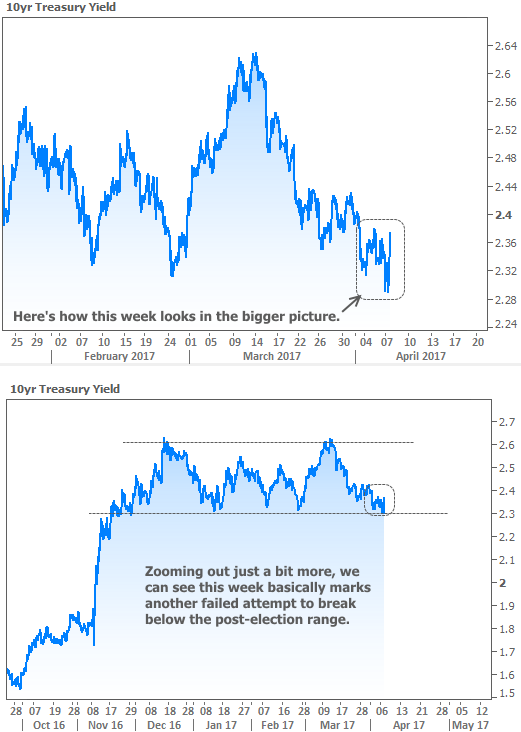 In terms of housing-specific data, there's some good news to offset the frustration of Friday's rising rates.  CoreLogic reported annual home price appreciation moved back to 7 percent after falling to 6.9 percent in the previous report.  In general, housing economists have been forecasting a downturn in the rate of appreciation.  CoreLogic itself continues to see annual appreciation falling into the 4 percent range by next year, so acceleration in the appreciation rate between now and then is a pleasant surprise.