It's beginning to look a lot like 2012.  That was a scary time for global financial markets, and that fear resulted in a golden age for mortgage rates. Not only was the Fed still actively engaged in ‘Operation Twist’ (whereby it sold shorter-duration Treasuries and bought longer-duration notes and bonds in an effort to bring long-term interest rates lower), but Europe was in the second stage of its potential credit crisis.

Europe’s first major stage of that crisis surrounded Greece, and it caused enough panic to get Europe’s benchmark 10yr rate just under 2 percent—roughly in line with US Treasuries at the time. The second stage was more serious, as investors worried that Spain and Italy would fall like dominoes after Greece’s eventual default.

When the Spain/Italy panic was at its climax in July 2012, 10yr EU benchmarks were all the way down to 1.16 percent. This dragged US Treasuries and mortgage rates lower as well, but mortgages had a hard time keeping up with sovereign debt during the global flight-to-safety (i.e. investors seeking safe havens to park money while volatility passes).

With the Fed announcing the mortgage-specific QE3 program in September 2012, mortgage rates enjoyed their longest uninterrupted stretch of near-record-low levels ever.

Fast Forward to Present Day: It’s not as blatantly obvious in the US, but the global economy is still very much in the weeds. As of this week, European rates are back at their all-time lows for the second time since the European credit crisis. 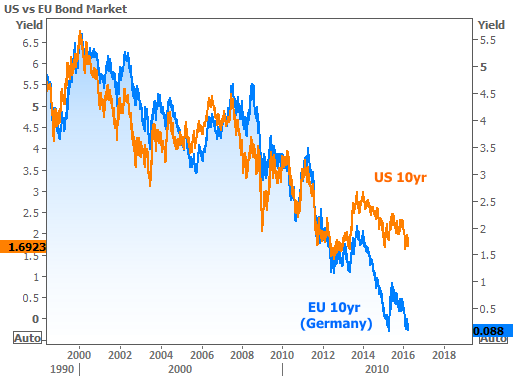 US bond markets have been forced to divide their attention among Europe, volatile oil prices, and a potentially serious turning point for stocks. Bonds pick and choose who to listen to depending on who’s making the most noise at the time, but when they start singing the same tune, bonds can’t help but listen.

That’s essentially what this week was all about. The meeting minutes, both from the Fed and the European Central Bank, confirm that policy-makers are quite concerned about the global economy—concerned enough to keep rates exceptionally low and to consider other forms of accommodation until economic momentum is successfully off the ground.

The Fed specifically noted that it’s stuck between a rock and a hard place in that it doesn’t have much room to provide new accommodation in the event of a downturn. Additionally, oil prices can’t seem to break back above $40 and stocks can’t seem to break out of the ominous parabolic ceiling seen in the chart below. 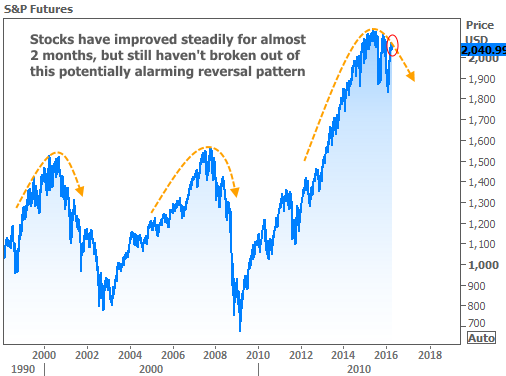 This is a lot to consider in terms of big-picture market shifts. Bond markets don’t really need to know the endgame. They only need to know they will benefit if current trends continue. And that’s exactly why we find 10yr yields back in the 1.6’s and mortgage rates back in line with 3-year lows.

Global economic gloom and doom isn’t crippling the housing market in the US. In fact, Freddie Mac noted that it sees 2016 as being the best year for housing in a decade.

But at least in terms of home price gains, Black Knight reminds us that 2016 will continue to be better for some than others, depending on geography.