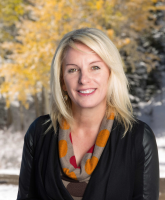 Rarely does the month of November offer so much activity for the housing and mortgage markets, but it always offers an updated conforming loan limit.

This refers to the maximum loan amount for mortgages that "conform" to the guidelines of housing agencies Fannie Mae and Freddie Mac.  These account for a vast majority of the mortgage market.

Because conforming loans typically offer the most competitive rates, loan limits have a distinct impact on affordability in certain price ranges.  In fact, many shoppers will limit their preferred price range to homes they can finance with a conforming loan.

That makes November an exciting month for anyone who happens to need a great rate on a loan amount closer to 550k as opposed to the prevailing $510,400 loan limit.

Even if your price aspirations are much lower or higher than that, new loan limits affect everyone by increasing turnover in the housing market.  Also, if you're shopping in a higher cost county, those loan limits will increase proportionally.  To keep things simple, we'll just focus on the base conforming limit.

Do we already know that the new limit will go up to $550k?

Not exactly.  But it will certainly be a lot closer to that than the current limit of $510,400.

How do we know?

New limits are based directly on a certain set of home price data collected by Fannie and Freddie's regulator, FHFA (not to be confused with FHA).  That data set is only published quarterly (and it doesn't come out until November 24th), but it tends to stick reasonably close to the monthly version of FHFA's home price index.  And we do have that!

In other words, even though we're waiting for an entire quarter of data (July/Aug/Sept), we already have other data for July and August that has historically been almost exactly the same.

So what do those 2 months tell us?

In a nutshell, while it's a curse in many regards, covid has ultimately been a blessing for home price appreciation.  This is no mystery to those who've been buying, selling, or simply following the housing market recently.

In addition to causing a massive (but temporary) slowdown in new construction, covid's biggest impact on the housing supply chain has been to almost completely erase the typical seasonal spike in existing home inventory. Inventory has definitely already turned a corner heading into the winter, so we already know prices won't suffer due to a sudden glut of homes hitting the market. 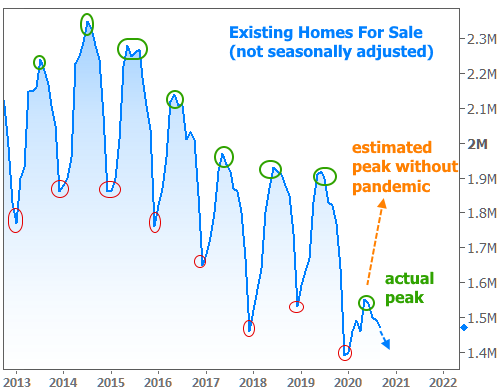 July and August also tell us that there was a noticeable shift in home price appreciation as the nation increasingly got back to business after the initial wave of lockdowns.  Here's how it changed the annual home price trend: 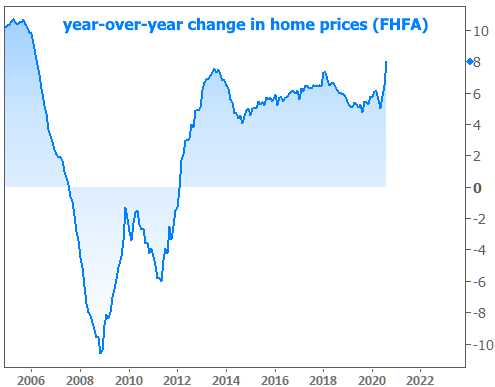 Now let's zoom in to monthly changes in prices.  In the following chart, we can more clearly see the temporary drop in prices at the onset of the pandemic, followed by the surge. 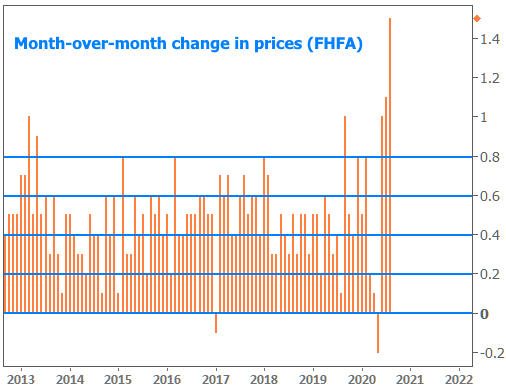 In other words, prices exploded higher in June and increased even faster in July and August.  This monthly chart allows us to make an informed guess as to where September will come in.  It could be in the same territory as recent months, but even if it were to fall all the way back to zero (highly unlikely), the new loan limit would still benefit from the huge gains in the other two months.  In that overly-pessimistic case, we'd be looking at something around $546k.

Where does that number come from?

Again, we're forced to estimate based on FHFA's monthly data set, and the quarterly numbers won't be exactly the same, but assuming they're as close as they normally are, the relevant number in the price index is September 2019's value of 278.3. 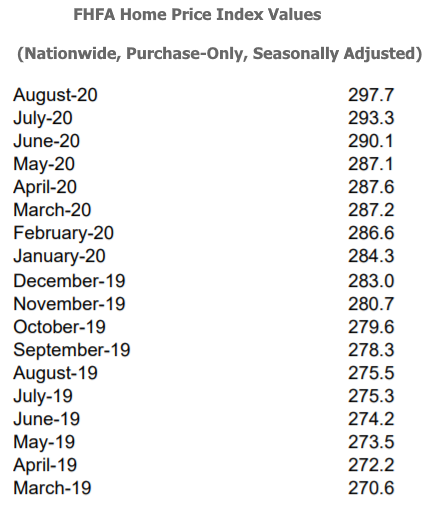 Once we have September 2020's value, dividing it by 2019's value will let us know how much to increase the current loan limit of 510,400.  If we assume no change from August, here's the math:

A few other potential scenarios:

Any way you slice it, unless we assume prices declined, $546k, give or take, is a baseline that's already in place from the first 11 months of the time frame considered.  Of course, this is all fairly speculative until we get the actual numbers, but given the actual numbers' historical similarity to the data we just covered, you could do worse as far as educated guesses are concerned.

This is just a quick public service announcement for all of those people eyeing the calendar, assuming that the Dec 1st deadline means they can still avoid the fee if they get their loan locked before December 1st.

THAT'S NOT HOW IT WORKS!

The refi fee deadline applies to lenders delivering/securitizing the loan in question with the agencies (Fannie/Freddie).  This can happen 2-4 weeks AFTER closing.  That means if you're reading this, it's already too late to avoid the fee.  Vastly more information in this previous newsletter.

It's been an interesting couple of weeks for financial markets--especially the bonds that dictate mortgage rates.  Actually, mortgage-backed bonds have largely been singing their own tune--as have mortgage rates--but more on that in a moment.

After the election caused rates to rise and fall in the previous week, it was vaccine-related headlines that did the trick this week.  Actually they mostly caused rates to rise--especially on Monday when news hit that Pfizer's vaccine was over 90% effective in late stage trial data. 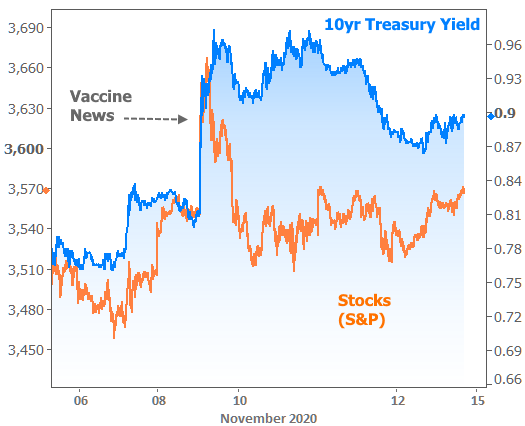 Pretty obvious move for 10yr Treasury yields, but why should we care about those?  Here's why: 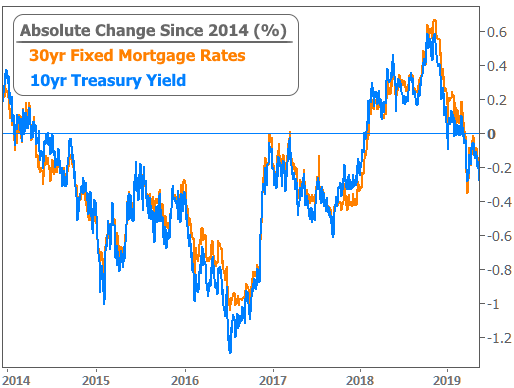 In other words, 10yr yields and mortgage rates are extraordinarily well-correlated over time.  That said, the correlation can break down significantly on isolated occasions.  It just so happens that the pandemic is now the most glaring example of such a breakdown.  Mortgage rates weren't able to fall as fast as Treasury yields on the way down, so now they're enjoying a refreshing amount of resilience as Treasury yields move higher.  In fact, mortgage rates are right about where they were at the beginning of October.  Meanwhile, the 10yr is roughly 0.30% higher! 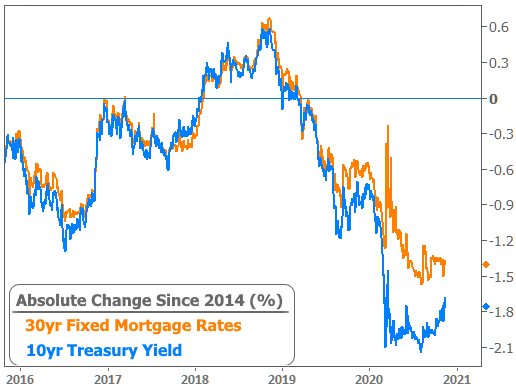