The housing market has been keeping its head down, keeping calm, and carrying on in the face of the biggest rate spike since the 1980s.  The ability to tune out rising rates is nothing new for home prices, as discussed a few weeks back.  The same is often true for home sales, but sales tend to show more of an impact than prices, and sooner.

The following chart shows several of the biggest rate spikes of the past decade (and yes, they do look small in comparison to 2022) in conjunction with New Home Sales.  One could argue that prices leveled off in 2018 as rates continued to rise, but the only case for immediate impact is on the sales front.  Even then, it's minimal. 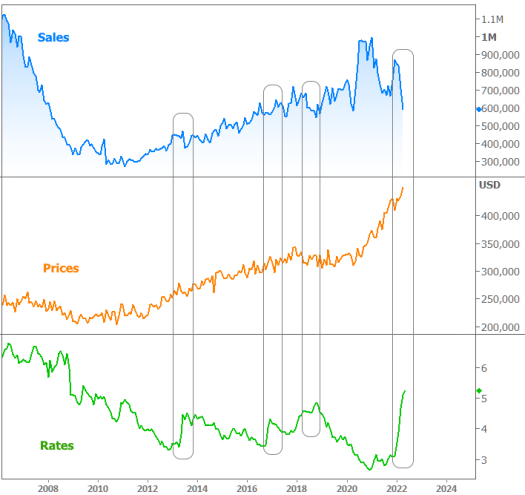 Whatever it was that accounts for the resilience in the past, it's clear that something new is happening right now.  Moreover, it is happening QUICKLY.  Just last month, New Home Sales were still higher than any other time in the 12 years leading up to the pandemic. Now in this week's new numbers from the Census Bureau, New Home Sales have plummeted to nearly the lowest levels in 5+ years.

And Pending Home Sales painted an even bleaker picture 2 days after the New Homes Sales data: 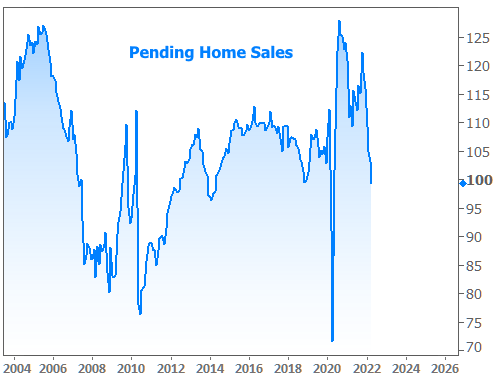 There are several ways to approach this.  None of them are too complicated or surprising. 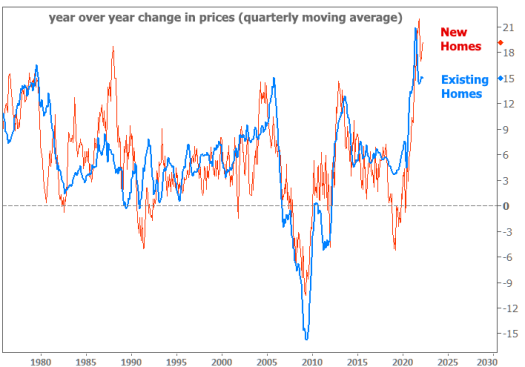 This was never bound to continue, even if rates had remained low. Exponentially less aggressive wage growth is just one reason. 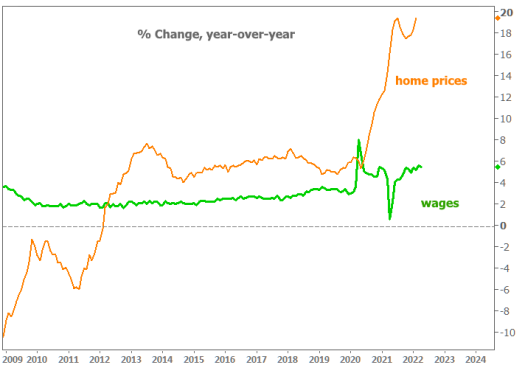 2. Rates have skyrocketed. Rapidly rising rates merely accelerate the much-needed cooling that housing market would have seen anyway.  Some may wonder how prices continue to rise even as rates have skyrocketed, but rates didn't really begin to spike until a majority of the recent home price gains were in place. In other words, to whatever extent rates help to speed up the cooldown, we wouldn't expect to see the effect in home prices just yet. 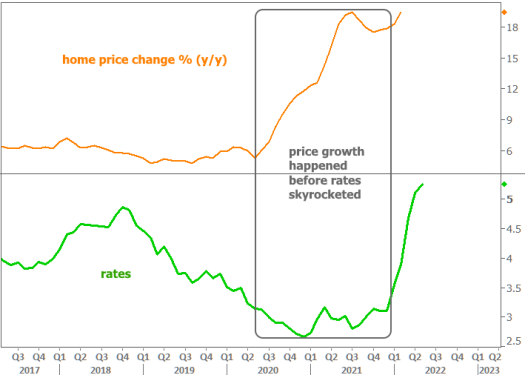 3. This has been a rare combination of price growth and higher rates.  We have unprecedented home price growth followed by nearly unprecedented interest rate increases. The juxtaposition goes a long way in helping us reconcile the drop in sales (think "affordability").

4.Inventory isn't really helping. The notion that inventory is holding back the housing market is a common refrain, and it's often been true.  It's even true right now depending on geography and price range.  But it's universally true when considering existing homes compared to new homes, even though new home inventory has technically recovered. 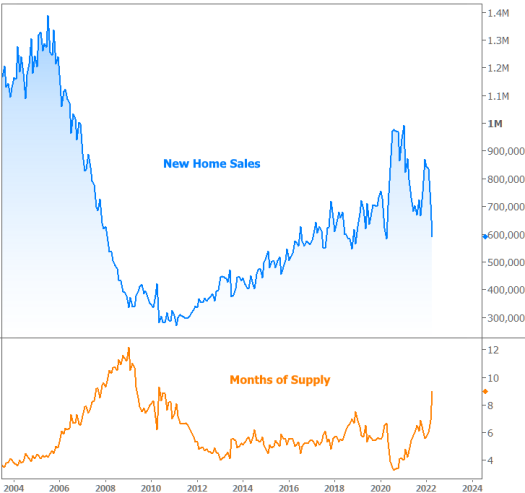 So inventory is no longer a problem for home sales?  Eh... not so fast.  Again, we're just talking about new homes.  That market did much of the heavy lifting early in the pandemic when existing homes were nowhere to be found.  Now they're suffering from rising material costs, rampant appreciation, and higher rates.  All of that creates affordability issues that put many new homes out of reach for many prospective buyers.  Last but not least, many new homes are simply "available for purchase" despite not being built yet.

Perhaps the most important thing to understand when it comes to inventory issues is the scope of new vs existing home sales.  A chart says more than words: 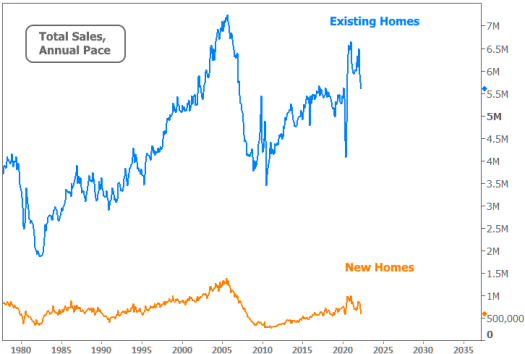 With that scope in mind (roughly 10 times more existing homes vs new homes), here's how inventory compares.  Note: most of the recent uptick in existing homes is seasonal. 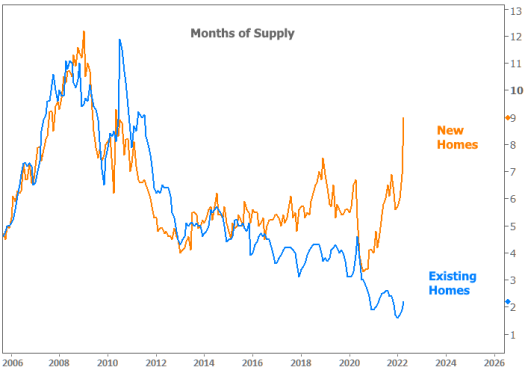 Bottom line: the housing market hasn't exactly turned on a dime to the extent suggested by the drop in New Home Sales. That said, there are signs of cooling.  Just this week, The National Association of Realtors (NAR) noted an uptick in inventory versus the same week last year.  Homes for sale were up 9% year-over-year.  That's the fastest pace NAR has recorded since they began tracking the data in 2017.

Is this scary?  It's actually promising. Housing overheated for understandable reasons.  Cooling is welcome. Inventory is welcome.  We need price gains to slow down to even begin to make a dent in affordability.

Speaking of prices cooling down, that's also important to the other side of the affordability equation: rates!

This week's inflation data showed a modest deceleration in both the headline price index and the "core" index (which excludes food and energy) for the first time since inflation really started surging in early 2021. 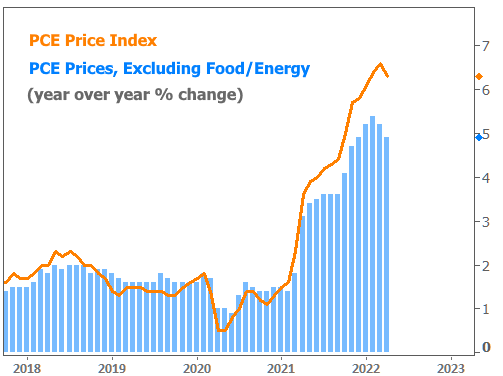 This is important because the bond market (which determines rates) has finally reached a point where traders are considering whether rates have risen enough to account for the inflation outlook as well as the Federal Reserve's response to inflation.  Traders who bet on the future level of the Fed Funds Rate are thinking flatter and flatter thoughts over the next 6 months. 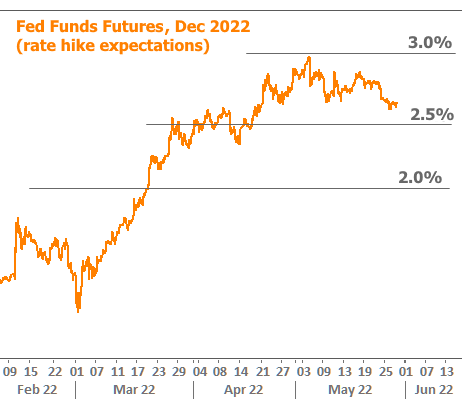 The Fed Funds Rate doesn't directly affect longer term rates like mortgages and 10yr Treasury yields, but Fed rate EXPECTATIONS correlate much better.  In other words, as expectations for Fed rate hikes have leveled off, so too have longer-term rates themselves..  The following chart has the same orange line from the chart above, plus 10yr Treasury yields: 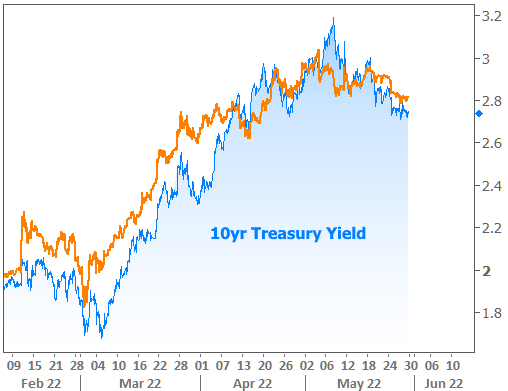 Bonds are also showing resilience in the face of a bounce in the stock market.  For most of the past month, bonds and stocks had been moving in lock step. 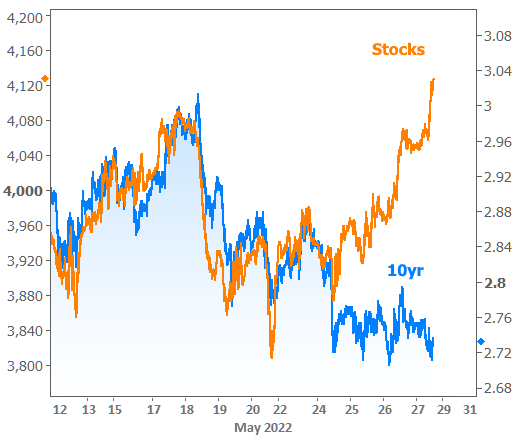 Is this good? Can it last?

Yes, it's very good, but there's no way to be certain it lasts.  What really matters here is that this is the first time in 2022 where we have legitimately been able to entertain that rates have shifted gears from "skyrocketing" to "sideways."

Please understand, the ability to entertain such things is no guarantee of their continuance, nor does it mean there won't be days that would lead us to second guess the conclusion.

Ultimately, the staying power of the current ceiling will be determined by incoming data (primarily, inflation data), and it will take a few months to assess Ukraine-related commodity price shocks.

END_OF_DOCUMENT_TOKEN_TO_BE_REPLACED

A nationally-respected and tech-savvy mortgage expert, Jeff is famous for his HOT™ loan process - Honest, Open and Transparent - a laser-focused approach to enhancing the consumer mortgage experience. For 30 years, he has been committed to making the "Latte Vision" a reality for today's tech-savvy consumers. So Simple, Just ClicknFinance.™