In the day ahead, bonds will digest manufacturing PMI data, both from IHS-Markit and ISM.  While these PMIs are typically big market movers--potentially, at least--the impact of economic data is generally muted for now.  Investors know things are bad.  They don't need data to confirm it.  Markets will be more interested to know when things start to improve, and for that, they'll be looking to coronavirus-related data and local government quarantine/reopening policies before economic reports that may take months to reflect reality.

All that do say the bond market is just doing its thing until something changes with respect to the coronavirus outlook.  "Its thing" can include pretty much any movement inside the recent range (roughly .54 to .67, although the early April highs in 10yr yields--.77--still aren't that high in the bigger picture).

The nice thing about yields being low and stable is that mortgage rates are also low and stable.  But are they as low as they should be?  Unless we dig a bit deeper, all the casual observer can see is that MBS prices are at all-time highs and rates are at all-time lows (according to Freddie Mac's weekly data, anyway...  You and I know that early March saw lower mortgage rates on average).

Now consider this relatively mind-blowing factoid: MBS prices are currently just over 104, but in the first week of March (when the average lender was at all-time low rates), prices were just under 103!  So we're more than full point better in price right now and the average rate is actually higher!  In other words, the Fed has succeeded in making MBS more competitive, just as it has on several occasions in the past. 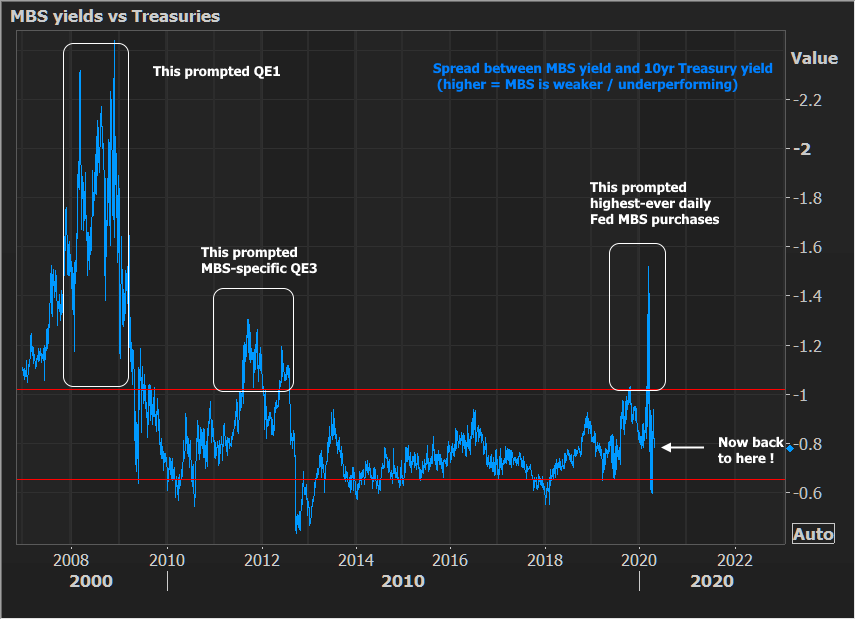 But the difference between now and then is the extreme level of disconnection between mortgage rates and MBS.  Notably though, that disconnection had been ramping up heading into QE3, but that was more a factor of rates and bond yields being exceptionally low in the bigger picture.  In general, the lower the overall bond market moves in yield, the wider the spread between rates and MBS, and MBS to Treasuries.

The widest/highest spreads in both of today's charts in early 2020 and 2011/2012 occurred when Treasuries were rushing to new long-term lows and immediately preceded bond-buying involvement from the Fed. 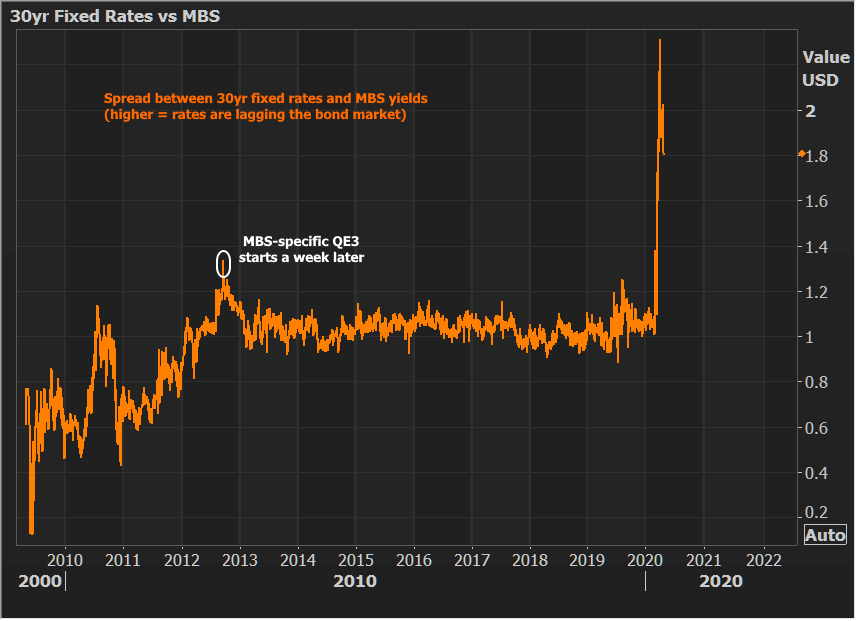 Why haven't rates taken the same hints as in the past?  Simply put, we're waiting for the forbearance tidal wave to die down.  That will help the healing process to begin, but keep in mind that we have no historical context for a baseline rate environment with 10yr yields under 1%.  It could be that we define a new range of spreads in such an environment.  Even so, that would only suggest a moderate change/elevation in spreads.  There's still plenty of room to tighten.  It's just going to take more time than we'd like.