The initial House draft of the CARES Act included a provision that Fed and Treasury would "extend credit to mortgage servicers that have liquidity needs due to the COVID-19 emergency or due to delinquency/default on mortgages due to the COVID-19 emergency."  That was fairly important because the CARES Act also effectively encourages homeowners to seek out forbearances and arguably suggests there's no downside to doing so.

To be sure, there was (and still is) a risk that servicers and the GSEs could run out of money if the forbearance issue gets big enough.  But that would just be the sensational headline for a few companies.  If the GSEs were affected, they'd take a draw from Treasury and life would go on.  By far the bigger issue is the generally defensive response that it's created in the industry.  This issue affects pretty much everyone.

Mortgages have value to investors due to the mortgage bond itself and the servicing of the loan.  Servicers get a % of the monthly payment.  If they can process payments and staff their call center for less than that %, they're profitable.  If they're facing a forbearance tsunami the likes of which we've never imagined, that profitability could be in question.

As such, it was no surprise to see investors drastically reduce the value associated with the servicing component of mortgages.  The consequence was that rates moved higher even when mortgage bond prices suggested they should be much lower.  Nothing has really changed about this yet, and we shouldn't expect it to change quickly.  That's why rates are still incomprehensibly high relative to mortgage bonds, as seen in the following chart.  The green line measures the gap between average 30yr fixed rates and mortgage bond yields, which had settled into a reliable range centered on 1.0% for the past 8 years. 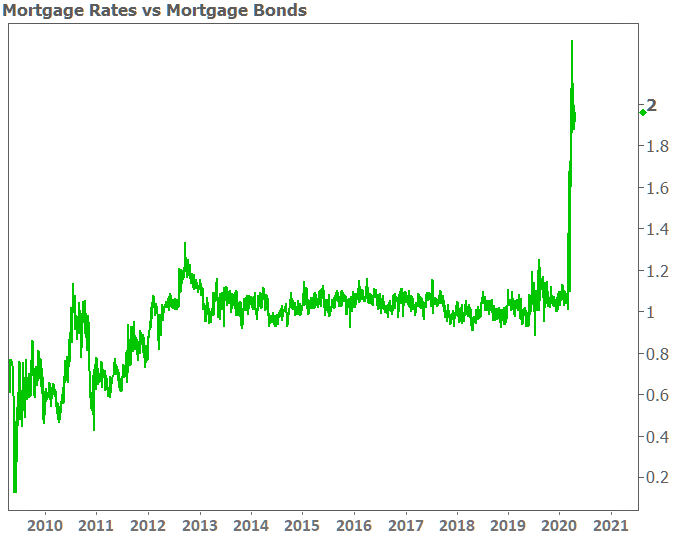 As this problem exploded by mid March, the industry began pining for a "servicer backstop."  After all, if the government was going to endorse widespread forbearance, it should do something to have the mortgage market's back.  The thinking was that if the Fed or Treasury would provide cash for the servicers, then mortgage investors wouldn't have to worry about how quickly they'd be repaid.

Unfortunately, the backstop is a supporting actor in this drama, at best, and a big, fat, red herring at worst.  Today's developments really drive this point home.

So what are today's developments?

In short, the FHFA (the agency that oversees Fannie and Freddie) provided hotly anticipated guidance on how it would treat loans in forbearance.  This has taken place over 2 days.  Yesterday's announcement provided a small token of clarity for Fannie Mae servicers.  It was inconsequential.  Today's announcement was more informative.  As hoped, FHFA is changing its policy that prevented loans in forbearance from being purchased by the agencies.  But that's the only way to describe the move in a positive light.

The grand notion of a "backstop to help save mortgage servicing values" was NEVER going to be something that came from Fannie/Freddie/FHFA/Etc.  There is plenty of evidence for that in the fact that FHA/VA rates didn't really respond when Ginnie Mae unveiled its own backstop.

The GSEs aren't in the habit of giving out free money to counterparties.  That's the realm of fiscal policy, primarily.  So if the GSEs weren't going to be giving out free money and if the forbearance tsunami was definitely going to do damage to servicing values, someone, somewhere in the value chain has to take a hit.  Today's announcement was FHFA's way of saying how big that hit is going to be and who's going to take it.

In short, lenders who were freaked out about having loans that couldn't be sold to GSEs due to forbearance can now breathe easy--at least for a few moments before they hear how much it will cost them to sell paper bearing the scarlet "F": 5% of the loan balance for a first time buyer and 7% for everyone else.  If these numbers had been in the 1.5-3% range, it would be worth some actual excitement.  But 5 and 7% are high enough that the only lenders taking advantage of this are those who will go under unless they can convert loans on their books to cash.

In other words, this is a last-resort lifeline that will prevent some lenders from going out of business.  Like so many crisis-inspired lifelines, there's a steep cost.  No one who has the capacity to keep these loans on their books will take this option.

So is this a big bust that does no good for anyone?

No, this is worth something.  It's just not the grand solution the industry wants (the one that has to come from the Fed/Treasury).  It's also a sobering reminder for borrowers who may have read the CARES Act as suggesting "forbearances for all!  No negative consequences!"  The agency most directly responsible for deciding mortgage costs just explicitly put a value on the negative consequence: 5% of your loan balance for first time buyers and 7% for everyone else.  Granted, they're not charging you directly, but they will charge your lender, so the rate you're offered will be adjusted to reflect that.  And because they don't know if you're one of the borrowers that will pull the trigger on forbearance, they have to adjust their rates across the board based on an estimated level of risk.

If there's an unintentional upside here, it's that the harshness of the costs will only further steel resolve among lenders to relentlessly verify income/employment throughout the loan process.  That, in turn, will increase the overall credit quality of newly originated loans and decrease the instances of forbearance.  That means fewer people will get loans, but the rates offered will be slightly better.